Agricultural innovations for biodiversity and farm profitability were the themes for the Greater Lincolnshire Nature Partnership's 2014 conference, held at Riseholme College in Lincoln on 6 November.

The GLNP's third annual conference was entitled Farming with nature, and attracted members of Lincolnshire's farming community together with those working in the conservation sector, both from across the county and further afield.

The event opened with a keynote from Professor Simon Blackmore, Head of the National Centre for Precision Farming at Harper Adams University who spoke on research into robotic innovations in modern farming systems.

This was followed by Clive Wood from Kings Game and Conservation Crops who spoke on Catch and Cover Crops and then Simon Tonkin from Conservation Grade on Being Fair to Nature. Lincolnshire farmer, and campaigner for a viable sustainable future for farming, Peter Lundgren concluded the conference with a talk on Profit, Pesticides and Pollination.

Professor Blackmore said: "It's very encouraging to see such large numbers of people being involved in this area. At the moment we are having to deal with the different pressures – commercial farmers on one side and the environmental lobby on the other. I see in the future these two will come together more closely.

"We had a big change after the war in production. We are still in a production mindset that has a reduced profit margin in it as we are seeing and has a compromise for nature. If we can move to a production system that's more flexible, we can start to reduce the compromise.

"At the moment we have these big machines used for a couple of weeks in a year and then sit there for the rest of the time. At the moment we put all our eggs in one basket. The concept of phased cropping might be to put an early, medium and late crop in and then be able to harvest early, medium and late with smaller machines and get much better usage.

"My approach is to try and make the whole production system more efficient not only for the environment but also economically."

Lincolnshire County Councillor Lewis Strange, who chairs the authority's Environmental Scrutiny Committee, praised the GLNP for encouraging the farming community to think about how innovations in arable farm practices can benefit not only their own businesses but nature as well.

He said: "Today has been a first rate conference with very interesting speakers, all the time asking the questions and points that many of us don't think about. It's also been about challenging a lot of held beliefs – particularly thought provoking was challenging farmers to think about what they do with sprays and chemicals. Farming is the greatest industry in the county but we need people like these to challenge and research new methods."

Farming with nature is one of the key workstreams of the GLNP.

GLNP Chairman, Richard Chadd, said: "Today's conference helped to generate an interesting debate on how agricultural innovation can have a positive impact both on farm profitability and biodiversity. While not all of these practices may be viable for our smaller farmers, we have heard from a range of speakers today that may have given everyone who attended somenew ideas to benefit the farmed environment throughout Greater Lincolnshire." 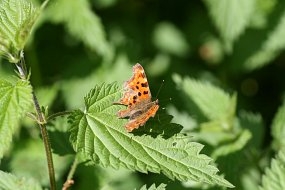