No, not the part man part bull of Greek mythology, but the aptly named minotaur beetle (Typhaeus typhoeus), a member of the dung beetle family. Until the beginning of May this year, the minotaur beetle hadn't been seen in Greater Lincolnshire since 2008.Then Matthew Blissett, a warden for Lincolnshire Wildlife Trust, spotted a male and female together at Scotton Common nature reserve and was quick to let the county beetle recorder know.

Unlike many other beetles which can be found in the summer, the minotaur beetle is more active during the winter months when it feeds on the dung left by animals. It also uses this dung to provide a food store for its developing young, dragging it back to their nest which is built underground. Only the male has the 'bull horns', which it uses to defend the nest and joust with other males.

The minotaur beetle can be found on sandy grasslands and heathlands from autumn to the following spring. Look out for a large (up to 2cm) black beetle ambling across your path – and be careful not to step on them!

Have you seen a minotaur beetle in Greater Lincolnshire? 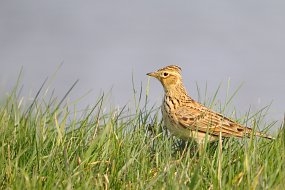 Time to take part in the Big Farmland Bird Count