Home Latest News Natural values: The contribution of the natural environment to growth and the economy

Natural values: The contribution of the natural environment to growth and the economy

The second conference of the Greater Lincolnshire Nature Partnership was held at the University of Lincoln's Riseholme College on 17 October 2013.

The conference demonstrated the value of the natural environment to economic growth and society in Greater Lincolnshire and how this can be incorporated within spatial planning, which is one of the main focuses of the GLNP.

The keynote from Professor David Hill, Chairman of the Environment Bank and Deputy Chair of Natural England, on the environmental markets and the contribution of natural capital to GDP. That was followed by talks from Paul Learoyd Chief Executive of the Lincolnshire Wildlife Trust, and Nathan Vear Head of Neighbourhood Improvement at North East Lincolnshire Council.

The day concluded with the launch of the Central Lincolnshire Biodiversity Opportunity Mapping study. Dominic Watkins of Chris Blandford Associates environmental consultants gave a talk on Establishing a Green Infrastructure Network for Central Lincolnshire and the role of Biodiversity Opportunity Mapping. The report and related maps will influence planning policy development in the area. One part of the report focussed on Witham Valley Country Park and the opportunities to bring people closer to wildlife in and around the City of Lincoln. Dominic Watkins described the event "as a stimulating conference and a great opportunity to get stakeholders together from across the social, environmental and agri-business sectors."

Environment Bank Chair, Professor David Hill said "The huge attendance at the conference demonstrates the rapid growth in interest in the area of natural capital and how society needs to account for impacts on it if we are not to create catastrophic problems in the future - for example, 40% of global GDP inherently relies on the things that nature provides for us. Government Treasury departments and corporate entities need to properly understand this link."

Richard Wills, Executive Director for Communities at Lincolnshire County Council and board member of the Greater Lincolnshire Local Enterprise Partnership commented that "At last there is the prospect of the environment being taken seriously; not just for its intrinsic value but as a significant contributor to economic prosperity. The GLNP has demonstrated its intention to shape and influence the growth plans for Greater Lincolnshire."

Over the past year the GLNP has moved from strength to strength, gaining six new partners and developing the business and advocacy plans. These plans will determine the GLNP's delivery and strategy work over the next five years and have been produced in consultation with all 45 current partners. 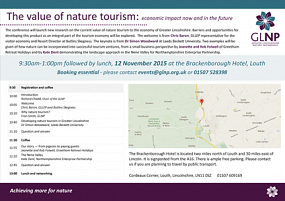 GLNP conference on the value of nature tourism announced 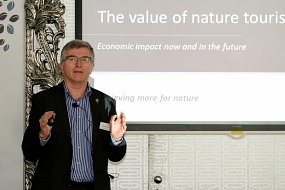